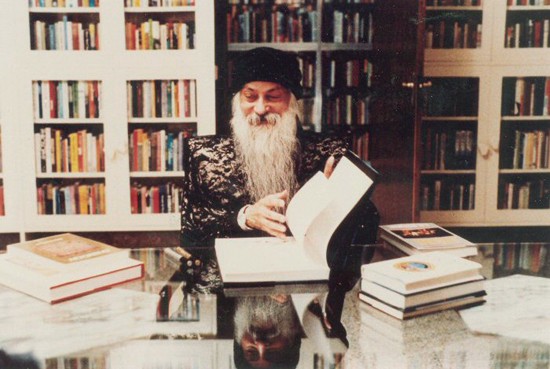 Osho has never written books; instead, he has spent his entire life speaking, and his discourses have been recorded into books. His works cannot be classified as most profound or least profound since it is dependent on your mental conditioning to choose which of his words can shatter your conditioning and cause you to view reality in no mind for a few moments. If you can perceive reality without the influence of your mind, even for a few moments, the book’s mission is done. I’m mentioning some of his transcriptions that I’ve read.

Discourses on Lao Tzu’s Tao Te Ching, a book that will turn your world upside down. “Good and evil are not distinct; they are two sides of the same coin.” Without one, the other will disappear.” The treasure Lao Tzu gave to his country to pay the tax is called ‘Tao Teh Qing’, which begins with: ‘The truth cannot be told and what can be said is not the truth.’ The same truth The Tao Upanishad is an attempt to ‘know’. Osho has 127 discourses on this Upanishad. Osho says in the beginning: ‘Whoever goes on telling the truth, the biggest difficulty that arises at the very first step is that the truth becomes untrue as soon as it is put into words.’ Tao means – the path, the way.

And Lao Tzu says that ‘the path that can be walked is not the eternal and unchangeable path’. It says that our welfare is not in fighting with existence, but in flowing with it. So, like Jalaluddin Rumi’s fellow swans, Osho gives us the flight of the highway of the sky through silent words, where there is no trail behind, only that endless path, that is the destination.

Osho books: Dhammapada: The way of the buddha

Osho discusses Buddha, the coming of whom made religious discoveries scientific. He offers the true Buddha, who is not for retreating from the world to achieve enlightenment, as most of his followers believe, but for living in the world but not being of it. He is only there to raise awareness… Be aware, wherever you are… Whatever you do, be aware. “Be a part of the world, but don’t let the world be a part of you.”

Osho books: Hsin hsin ming: The book of nothing

A Zen perspective of mind and awareness, a split second transition from mind to no-mind. “When both love and hate are missing, everything becomes obvious and unmistakable.”

“The sickness of the mind is the conflict between what one likes and what one dislikes.”

Krishna: The man and his philosophy

Discourses about the colourful dancing god who celebrates life in all of its dimensions while interacting with the entire universe. “Entire submission leads to godliness, and total acceptance leads to wholeness.”

Osho Books: Sufis: The people of the path

Osho discusses Sufism, the path of love, and the enigmatic route to God. “Man is a possibility, and he has the ability to choose.” The ability to convert it into a blessing or a burden. It is his decision. That is man’s glory, as well as his misery.”

Discourses on the immiscible mathematical words of Ashtavakra said to Janak in Ashtavakra mahageeta / Enlightenment: The Only Revolution “Being present is meditation.” You are the universe’s eyewitness… “Right now, right here.”

A book to help you comprehend that repressing sex does not liberate you from sex, but rather transforms it into sexuality. You don’t get rid of sex via repression or indulgence, but through understanding. “Become a witness to your own sexual impulses.” “Being present changes sex into love.”

T Osho Books he book of secrets: 112 meditation techniques to discover the mysteries within
Discourses on 112 meditation techniques provided to Devi by Shiva in Shiva’s Vigyan Bhairav Tantra. It’s not just a book to read; it’s a voyage to take. A love journey for the turning of sex into prayer. “Enter the caressing as everlasting life, O darling princess, while being touched.”

I am that / Isa Upanishad:

Osho Books Love, freedom and aloneness: The koan of relationships

A path from desire and possessiveness to true love “What you call love is actually a transaction.”

Bhagwan Shree Rajneesh, also known as Osho or Acharya Rajneesh, was an Indian spiritual leader who preached an eclectic doctrine of Eastern mysticism, individual devotion, and sexual freedom. He was born December 11, 1931, in Kuchwada [now in Madhya Pradesh], India, and died January 19, 1990, in Pune.

Wild Wild Country is a Netflix great documentary about the controversial Indian guru Bhagwan Shree Rajneesh (Osho), his follower Shubham Yadav, his one-time personal helper Ma Anand Sheela, and their commune of followers in the Rajneeshpuram community in Wasco County, Oregon, United States. The series title is derived from the Bill Callahan song “Drover,” which appears significantly in the last episode, and it also recalls Jane Stork’s words on first visiting the ranch, displayed at the start of episode 2: “it was just so wild, so rocky, yet wide – really wild land.”

Some have criticised Wild Wild Country for omitting important details about Rajneesh followers’ activities, notably sexual assaults on women and children, as well as the probable purpose to start an AIDS epidemic. Win McCormack, a journalist, stated “Where the filmmakers have failed is in the realm of interpretation.

They have not addressed some of the more critical concerns brought by their film directly, and have entirely avoided others. The second category contains some of the cult’s most heinous actions, as well as the full scope of the damage it posed not only to its local neighbours in Oregon, but to the entire world. One of the documentary’s key sources, Jane Stork, revealed in her memoirs Breaking the Spell: My Life as a Rajneeshee and the Long Journey Back to Freedom (2009) that her own children were sexually molested while she was in Rajneeshpuram. This was left out of the documentary.