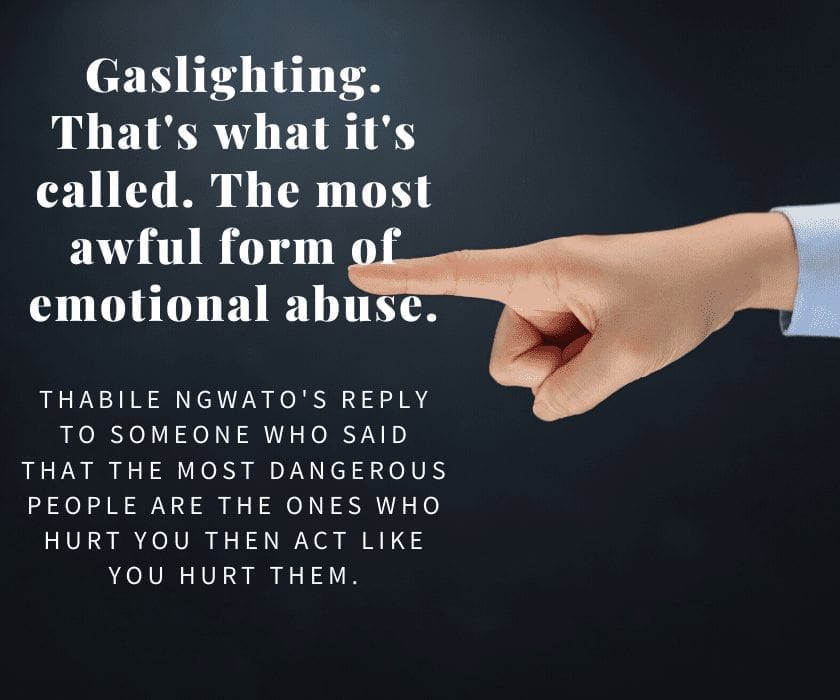 One of the fundamental human rights he denies you are the right to be furious at him. He feels that no matter how he abuses you, your voice should not rise and your blood should not boil (Emotional Abuse Quotes).

He is the only one who has the right to be enraged. When your rage erupts, as it will for any abused woman from time to time, he will most likely try to shove it back down your throat as quickly as he can. Then he turns your rage against you to demonstrate how irrational you are. Abuse can make you feel suffocated. You may experience physical or emotional symptoms to swallowing your rages, such as sadness, nightmares, emotional numbing, or eating and sleeping issues, which your partner may use as a reason to further denigrate you or make you feel insane.”

Emotional abuse quotes: Lundy Bancroft, Why Does He Do That?: Inside the Minds of Angry and Controlling Men

Scars from mental brutality can be as deep and long-lasting as those from punches or slaps, although they are not always as visible. In fact, even among women who have experienced partner violence, half or more claim that the man’s emotional abuse is causing them the most suffering.

“Too often, survivors’ experiences have been dismissed, trivialised, or misrepresented.” Writing is a crucial healing tool because it allows you to define your own world. You can say, “This happened to me.” That was how horrible it was. It was the adult’s fault and obligation. “I was—and continue to be—innocent.” Ellen Bass and Laura Davis’s “The Courage to Heal”

Emotional abuse quotes – Danielle Bernock, Emerging With Wings: A True Story of Lies, Pain, And The LOVE that Heals

Trauma is an individual experience. If it is not authenticated, it does not vanish. When it is ignored or invalidated, the quiet screams continue inside, heard only by the person who is imprisoned. Healing might begin when someone enters the suffering and hears the shouts (Emotional Abuse Quotes).

“My dad had limitations. That’s what my good-hearted mom always told us. He had limitations, but he meant no harm. It was kind of her to say, but he harmed.”

Emotional abuse quotes: Beverly Engel, The Emotionally Abusive Relationship: How to Stop Being Abused and How to Stop Abusing

The insults, insinuations, criticism, and charges of emotional abuse eventually erode the victim’s self-esteem until he or she is unable to judge a situation realistically. He or she may begin to suspect that something is amiss with them or that they are going insane. They’ve been emotionally beaten down to the point that they blame themselves for the abuse.”

Emotional abuse quotes: Lundy Bancroft, Why Does He Do That?: Inside the Minds of Angry and Controlling Men

Living with the abusive man has taught her that there are no simple solutions. “He’s cruel,” remark his friends. But she is well aware of the numerous ways in which he has been kind to her. “He treats you that way because he can get away with it,” friends claim. I would never allow somebody to treat me in that manner.” But she knows that when she puts her foot down the most firmly, he reacts by becoming his most enraged and scary. When she defies him, he makes her pay—sooner or later. “Leave him,” friends advise. But she knows it won’t be so simple. He will pledge to change. He’ll make his friends and family feel sorry for him and put pressure on her to give him another chance. He’ll get seriously despondent, making her concerned about his well-being. And, depending on the type of abuser he is, she may be aware that leaving him will make him dangerous. She may even be frightened that he would attempt to take her children away from her, as some abusive partners do.”

For emotionally abandoned children, perfectionism is the unrivalled defence. The youngster is saved from giving up by the existential unattainability of perfection, unless or until his lack of success leads him into the depression of a dissociative disorder, or launches him hyperactively into an incipient conduct disorder.

Perfectionism also gives the weak and unsupported youngster a feeling of meaning and direction. Striving for perfection, disguised as self-discipline, provides a phantom sense of control. Self-control is also safer to seek because abandoning parents usually save the harshest punishment for children who complain loudly about their neglect.”

Christina Enevoldsen, The Rescued Soul: The Writing Journey for the Healing of Incest and Family Betrayal

Vulnerability is wonderful in a good relationship. It leads to greater intimacy and stronger ties. When a healthy person understands he or she has harmed you, he or she feels regret and makes restitution. It’s safe to be open and honest. Vulnerability is harmful in an abusive system. It’s regarded as a flaw, and it serves as an invitation to further mistreatment. When an abusive person discovers a weakness, they experience a surge of power. They take advantage of it to obtain more authority. Crying or moaning confirms that they have poked you in the appropriate place.”

Physical abuse may be the first thing that comes to mind when thinking of abuse. However, abuse can take various forms. Emotional abuse is equally as harmful as physical violence, and it frequently comes before it, according to Trusted Source. They can occur concurrently at times (Emotional Abuse Quotes).

At first, you may be in denial. It can be frightening to find yourself in this scenario. It’s normal to hope you’re mistaken.

You may also experience the following emotions:

According to a reliable source, severe emotional abuse can be just as damaging as physical violence. Both can contribute to low self-esteem and sadness over time (Emotional Abuse Quotes).