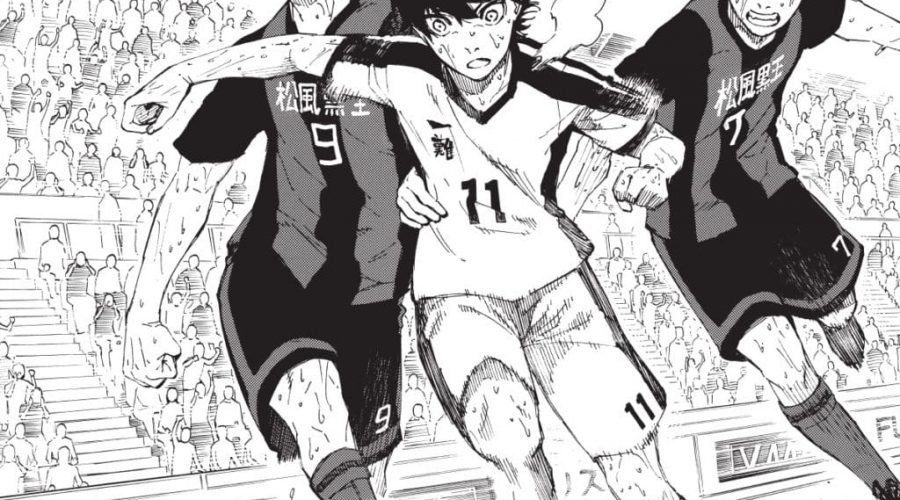 Japan’s loss from the 2018 FIFA World Cup causes the Japanese Football Union to launch a programme scouting high school youngsters who will begin training in preparation for the 2022 Cup. Isagi Yoichi, a forward, was invited to this programme shortly after his team was denied entry to Nationals because he passed to a less-skilled teammate – who missed – instead of attempting to score the game-changing goal himself.

Ego Jinpachi will be their coach, and he plans to “destroy Japanese loser football” by instituting a radical new training regimen that will isolate 300 young forwards in a prison-like institution called “Blue Lock” and subject them to rigorous training aimed at producing “the world’s greatest egotist striker.”

Japan’s team is still reeling from a humiliating setback at the 2018 World Cup. But what isn’t there? A true Ace Striker who can lead them to victory. The Japan Football Union is hell-bent on developing a striker who hungers for goals and thirsts for success, and who can be the deciding instrument in turning around a lost match…and they’ve gathered 300 of Japan’s best and brightest youth players to do so. Who will emerge as the team’s leader…and will they be able to out-muscle and out-ego everyone in their path?

Despite his scathing criticism of Japanese citizens and the media, Sae Itoshi, the brilliant midfielder, has set his sights on Blue Lock, where training is about to begin. To survive the first round of the training centre’s round-robin tournament, Isagi’s Team Z will need to discover a method to deploy their own unique “weapons” while dealing with ego clashes. What does it take to be the world’s best?!

As the first round of Blue Lock’s selection continues, Isagi’s Team Z has tasted sweet triumph after defeating the strong Team Y. But it isn’t long until Team Z faces an unfathomable internal schism… Furthermore, Team Z’s Hyoma Chigiri is on the verge of quitting. Will Team Z be able to unite in time to avoid loss in the face of Team W’s formidable aces, the Wanima twins?

The final match of the first Blue Lock selection round begins! If Isagi’s Team Z wants to stay in Blue Lock, they must win the match. Their opponents: Team V, Wing 5’s strongest team, captained by prodigy Seishiro Nagi. Will Team Z’s desperation outweigh Team V’s tremendous offensive power? The key to triumph is “the reproducibility of a goal”…

With fifteen minutes remaining, Team Z has managed to catch up to Team V and the prodigy Nagi’s overpowering scoring ability. All of the players are looking for the “awakening” that will push their talents to the next level in the midst of this difficult setting… The enthralling contest against Team V has come to an end!

The Blue Lock Anime Adaptation Has Been Announced, and a Trailer Has Been Released:

Finally, the wait is over! The popular football comic series will eventually be adapted into an anime series. Blue Lock Anime’s official website has been launched.

Sit tight, because, in this post, we’ll go over all you need to know about Blue Lock Season 1 anime release date, storyline, trailer, and expected cast.

Tetsuaki Watanabe and Shunsuke Ishikawa are rumoured to be directing the anime, which will be scripted by Taku Kishimoto.

The anime was announced at the same time as its 159th chapter was released. The number of chapters covered in Blue Lock Season 1 is unknown.

The official Japanese animation website reveals that this anime was created by Eight Bit Animation Studio, which was also responsible for the creation of the ‘The Time I Got Reincarnated as a Slime’ anime.

As a result, we anticipate that the animation will be quite good. We should expect a lot from the animation because it’s a sports anime.

In comparison to other genres, there haven’t been as many anime centred on sports.

Blue Lock manga has outstanding artwork; it should be skillfully adapted or the anime would fail. This may be illustrated with an example from OPM Season 2, and we anticipate that things will proceed smoothly in the next One Punch Man Season 3.

In contrast to One Punch Man Season 1, the anime couldn’t keep up despite the fantastic artwork.

Blue Lock’s artwork may be difficult to keep up with, but because its development is in the hands of Eight Bit Animation Studio, we should not be disappointed.

Kuroko no Basket’s animation, for example, created the ideal backdrop for a sports anime. Similarly, the Blue Lock’s animation is expected to hold that energy.

Blue Lock is an anime about football. Season 1’s trailer is officially here, and fans are ecstatic after getting a sneak peek from the makers. The storey takes place in 2018 after Japan finished 16th in the FIFA World Cup.

As a result, the Japanese Football Association decided to form Blue Lock in order to bring out the best in Japan’s strikers. Only one of the 300 strikers chosen from throughout the country is expected to realise his goal.

Jinpachi Ego, an enigmatic and eccentric coach, is engaged to teach the strikers in order to win the World Cup in 2022. He constructs Blue Lock, a prison-like facility where gifted strikers from all across Japan are forced to train and compete against one another.

The attackers must develop the proper ego in addition to their skills to become one of Japan’s National arrogant Ace Strikers capable of achieving the objective of winning the World Cup. Yoichi Isagi, the story’s protagonist, is also one of the 300 strikers chosen for training in the Blue Lock facility.

Yoichi, who thought he was fairly talented, understands how much space for development he has when compared to the other strikers.

Yoichi wasn’t the finest player, but his incredible ability to think and play, to forecast the game’s pattern, was pretty astounding.

Apart from Yoichi, the primary supporting character, Nagi Seishiro, was a standout performer. His abilities, capabilities, and playstyle created an impression on him as the final striker standing.

Every striker possessed some undiscovered potential. Jinpachi Ego, their coach, always referred to them as “unpolished jewels.” As a result, the Blue Lock facility allowed every one of those 300 strikers to show themselves. Yoichi, who failed to bring his high school soccer team to the nationals and regrets not being more selfish at the time, finally clears his mind and sets his ambition to be the one to bring Japan glory. As the storey progresses, the competition between all of the ‘unpolished jewels’ becomes increasingly tense.

However, as previously stated, there is no information on how many chapters Blue Lock Season 1 will cover, but, surely, Blue Lock will be one of your favourites, especially if you are a sports anime enthusiast.

According to the information we have, the voice actors for Blue Lock Season 1 are: